We have a plan Stan

{ 1 comment }
by Jessi on April 23, 2009
We have a two year plan. I think.
In order to explain, I need to provide some background info and I’m just warning you it’s going to be long.

So I spent last Wednesday through this past Tuesday in the beautiful city of Boston. I was hoping that this trip would provide me with some sort of lightbulb/revelation/inner peace about what I was going to do with my life. No such luck.

The trip went more like this:I had an interview with a direct marketing firm on Thursday. The interview went really well and they asked me to come back for a final interview so I decided to stay through Tuesday morning instead of coming back on Sunday as planned so that I could do the second interview on Monday. I really liked the manager that I interviewed with but the position I was applying for was never really described in detail (in hindsight that should have been a red flag but too late now).
On Friday, I went to an open house for my grad school program at Boston University. I really enjoyed meeting the faculty, and the program sounds really great BUT all I could think about was the neon light flashing dollar signs in my head because of how much student loan debt I would have to be in to go there. 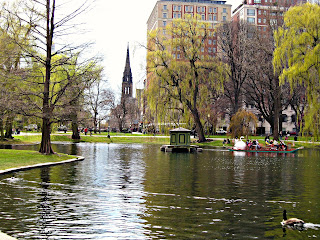 On Saturday and Sunday I pretty much just walked around exploring Boston with Randy & Tamara (who were so gracious to let me crash on their couch for a week). I loved the city even more the second time around. I thought the snow was pretty in January, but the Public Garden in April is 10 times better. I love walking down Newbury Street and stopping to get a coffee at an underground cafe, I love the 5-story Cambridge Antique Market, I LOVE having Dunkin Donuts on every corner. In short, I felt totally at home.
SO, Monday rolls around and I have to leave the apartment three hours early just to get to this place that’s ten miles out of the city –Monday was also Patriot’s Day & the Boston Marathon so most forms of Public Transportation were out. Long story short, I spent the next 8 hours following this 25-year old guy around door-to-door selling in my suit and brand new shoes in 40 degree weather! They offered me the job at the end of the night, but needless to say I said, “Thanks but no thanks.” I was finally done around 9:00 at night, got dropped off at the train station where I was the only one there besides some creepy old man,and finally decided to just catch a cab all the way back to downtown Boston. The whole thing was a nightmare- a ‘learning experience’ you could say.

Anyway, the next morning I woke up at 3:30 (2:30 Arkansas time) to go to the airport. I was supposed to fly out at 5:40 a.m. and be home by 10 BUT this being the day after the Boston Marathon and an extra 40,000 people were flying out and all it took me 7 flights to get a seat SO I got home around 9 o’clock Tuesday night (18 hours later). I did, however, have plenty of time to think and talk to Jacob about my grad school/interview experiences. We weighed all of our options and made a decision, I think. We are going to stay in Fayetteville for a year, taking whatever jobs we can get, and I’m going to defer my enrollment at Boston University until August 2011 because:

We fully intend to move to Boston in a year. I’m not giving up, just taking it slow. This decision has caused me to be oddly calm about the future. It’s still not really in my nature to take a break and assume that ‘everything will just work out’ but I have to believe it or I’ll go crazy.

In other news, I guess I’m officially on the job hunt in Northwest Arkansas and a week from today I will be completely done with college. crazy