Hi strangers! Well, I’m back from Michigan and came home to quite the unusual homecoming gift.

Water. Lots and lots of water.

Floods to be exact.

Apparently it rained (with the occasional hailstorm) the entire 5 days we were gone. When we got back to Fayetteville Sunday evening, our house looked like it had two rivers on either side of it.

What, that’s not a good enough visual for you?

Here’s my garden and our backyard on Sunday evening.

Unfortunately, we got another 6 inches of rain yesterday, and things quickly went from bad to worse.

It started raining hard in the morning, and by lunchtime it looked like this

By the time my boss sent us home because of the storms (around 3:30) the roads were a disaster. I stopped at the grocery store and my friend from work, Shelly, called to say her sister (who lives in the next neighborhood next to ours) couldn’t get to her house.

I had no choice but to try for myself. I made it to the underpass a few miles from my house and it looked like a river with cars floating in it.

This was before they closed the road. It was even worse when I saw it.

Police had already barricaded the road so I had to turn around and try the alternate route. I made it to the back way into our neighborhood and it was blocked off too.

I found out later it was because of this.

via the Fayetteville Flyer

I started to worry, but I thought of one last way around the original underpass, and thankfully it was still open. I made it to the road our neighborhood is located on, and was again stopped by a barricaded bridge with stranded cars. I drove through several back streets and alternate routes to our house, but every time I would come to a closed road.

At this point, I started shaking and getting really worried that I was going to have to abandon my car and walk the 1+ mile to my house (in the pouring rain, with a laptop and two bags of groceries-mind you).

I went back to the street our neighborhood was on and mentally prepared to walk wade home in my dress pants and flats. This time I could see people on foot being turned away before the bridge and a policeman wading out to get to a stranded car.

I wasn’t going to be able to cross the bridge.

The reality of not being able to walk to my house when I was only two neighborhoods away hit me like a ton of bricks.

I was out of options and on the verge of breaking down.

In a last ditch effort, I went back through the neighborhood I had been directed to turn around in and came out the other side. I could see the back of the next neighborhood up from ours (the flooded neighborhood of Shelly’s sister) past what looked like a river. But, cars were crossing.

I held my breath and decided to go for it. It must have been almost a foot of water. I could feel my car swaying in the current. I gunned it and was able to make it to higher ground just as I was losing control of the car. I made it through the flooded neighborhood and to my own.

The neighborhood I drove through to get to my house.

I was shaken but safe, almost 2 hours after I had left work (it normally takes me 15 minutes).

In retrospect, I understand that it was completely foolish of me to cross the bridge over the flooded creek, but I was desperate and panicked. When I saw the news stories about the deaths from cars being swept away in the floods, I shivered knowing that could have been me.

Even with the record snowfall we had this year and the deadly ice storms of recent winters, I have never in my life been as scared while driving as I was in the floods last night. 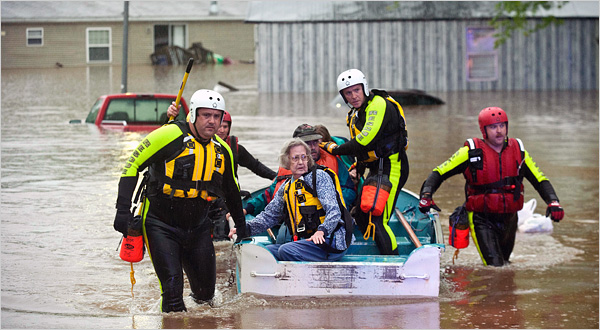 *all of the following pictures are from the KNWA Facebook page

Eureka Springs –an hour north of us

A bridge I drive over to get to work every day.

Remember that State Park we stayed at a few weeks ago?

Unfortunately, our flooding was not the only severe weather in the state. I am so thankful that the only victims I’ve had to mourn are a few plants from my garden. The tornado that destroyed Vilonia was only about 10 miles from my parents house.

I think we’re all ready for a little sunshine.